Diego led the Team during both Matteo Renzi / Paolo Gentiloni and Giuseppe Conte administrations. Diego was also a member of the Italian Government delegation at the G-20 meetings in Hangzhou, China (September 2016) and at President Obama’s State event for Italy in October 2016.

He was a member of the Expert Advisory Group (EAG), a OECD’s 2-year project (2016-18) on “Going Digital: Making the Transformation Work for Growth and Well-Being”, to help policymakers better understand the digital revolution that took place across different sectors of the economy and society as a whole.

Government as a platform

The Italian Government Digital Transformation Team was created to build a series of fundamental components on top of which simpler and more efficient services for the citizens, the Public Administration and businesses, can be built. 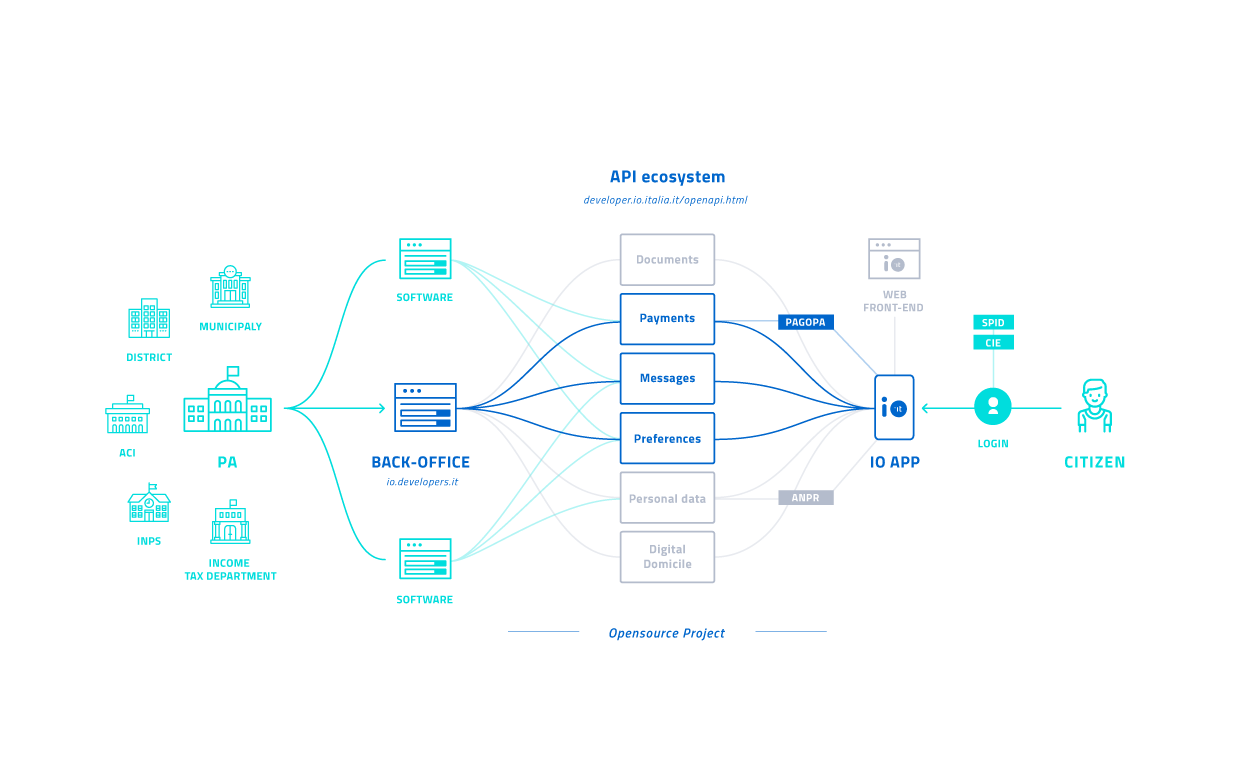 The breakthrough innovation is the creation of IO, the app that is gradually allowing citizens to interact with the Public Administration. In this way, the Team has paved the way in rethinking access to local and central government services for citizens.

Birth of the Digital Transformation Team

A core team of highly skilled tech talents to work on the creation of “the operating system of the country” is born.
Read more

Publication of the Three Year Plan

The Three Year Plan for the Digital Transformation of the Public Administration has been approved by the Presidency of the Council of Ministers.
Read more

After years of struggle, ANPR, the single national database of demographic data of all Italian residents, is relaunched.
Read more

Approval of the CAD

Publication of the design kits

Designers Italia presents the new kits to help design modern, simple digital services without having to reinvent the wheel every time.
Read more

Publication of guidelines and tools for software acquisition and reuse

With the guidelines, administrations and departments know how and where to share software among each other using Developers Italia.
Read more

io.italia.it, the breakthrough innovation to gradually allow citizens to interact with the Public Administration, is launched.
Read more

End of the mandate of Diego Piacentini

Over 1,000 citizens downloaded and started to test IO.
Read more

A State Owned Enterprise (SOE), operating under the supervision of the Presidency of the Council of Ministers, is established to manage and ensure deployment at scale of pagopa, the digital payment platform for public services. The company inherited as well the execution of IO.
Read more

Birth of the Government Department for Digital Transformation

Publication of IO in stores

IO is published on the App Store and on the Play Store.

Start of “Bonus Vacanze” on IO

The “Bonus Vacanze”, a subsidy for citizens to support domestic tourism , is launched as the first of several services on IO.
Read more

Start of Cashback on IO

As part of the “Cashless Italia” plan promoted by the Italian Government to reduce use of paper money, a 10% cashback on purchases with payment cards and apps registered on IO is initiated.
Read more

IO becomes one of the channels on which COVID-19 Green Certification, also known as Green Pass, can be obtained
Read more

This document contains a report of the activities carried out by the Italian Government’s Digital Transformation Team from September 16, 2016 to September 30, 2018, evolution of the strategy for the PA’s digital transformation drawn up in the Three-year Plan, as well as rethinking of digital public services for citizens and businesses

From Seattle to Rome

Towards the new “operating system” of the country

From codes to code

Tailor-made services for citizens, a designer community is born

The Three Year Plan: The Road to Digital Transformation of the Country

PagoPA: where we are now and what the next steps will be

18app: the story of a problem and of how it was a solved

Open Software and Public Administration: online the Guidelines for software acquisition and reuse

A 2022 story and the road to making it happen: Anna and the project IO

From Infrastructures to Services in Public Administration

Innovation in Government services: a framework of principles for technology procurement

Commissioner in the mirror

Italy in the eGovernment Benchmark 2018: a problem of digital maturity of services or country?

Data & Analytics Framework (DAF) and open data: where we’re at

The growth of digital payments in Italy: the numbers of pagoPA

2019, a turning point for ANPR: Italy moves closer to establishing a national registry

A strategy for the Italian Public Administration’s digital infrastructure

The Advantages of the Electronic ID Card, now easier to obtain with the new “CIE Agenda”

The open source revolution in the Italian Public Administration

How to turn your Municipality into a virtuous digital public administration

A kit for migrating public services to the cloud

How much does a payment cost? The reasons why pagoPA helps the State and citizens save money

An app for citizens, designed with citizens

pagoPA: the State’s subsidiary company for digital payments in Italy is born